When it comes down to it, on Valentine’s Day, many of us are thinking, in one way or another, about romantic love. While this post is geared toward single ladies, I hope married ladies might benefit from it as well.

Growing up, I remember hearing a woman say that she told God exactly what she wanted in a husband — down to curly black hair and dimples — and that’s what He gave her. Along the same lines, in a book I read recently, four sisters in their early twenties talked about their own future-husband-requirements lists. Rather than physical traits, these sisters included values such as “must love children,” “must be a good steward of his money,” and “must be slow to anger.”

I’ve never made such a list myself, but I do think it’s important that women prayerfully consider the characteristics they value in a husband and then not settle for less. The color of a man’s hair or eyes is probably trivial, but his work ethic, his spiritual condition, and how he treats other women (such as his mother, sisters, and grandmother), are critically important.

While it’s important to have standards when choosing a spouse, I also encourage you not to take your list too seriously.

Here’s what I mean:

Before I got married, I never had a this-is-what-I-want-in-a-husband list — at least, not on paper. I did have somewhat of a mental list going on in my head, and there was one very important requirement at the top: My future husband HAD to be older than me. Why? For the simple reason that if he wasn’t, I’d never be attracted to him. Obviously, no attraction = no marriage.

When I was twenty-three, I enrolled at Texas Bible College (TBC). Church ministry had always been a large part of my life, and I wanted a place where I could do focused, structured Bible study. The overwhelming majority of the students would be fresh out of high school, making even the senior class younger than I was. I knew I probably wouldn’t find “The One” at TBC, and I was fine with that.

Three weeks into the fall semester, a friend coaxed me out of my dorm room to toss around a basketball. To this day, I’m not sure why I went; at the time, I avoided sweat-inducing activities like wearing white after Labor Day, and the East Texas sun was not kind! But I went, and as we approached the court, I saw that a couple of guys had beaten us there.

Within minutes, the boys roped my friend and me into a game. One of them, Josh, had a carefree grin and an amazing sparkle in his eyes: I had seriously never seen anything like it! It may sound cliché, but for the first time, I understood what it meant for someone’s eyes to dance. We all had a lot of fun that day, and in the days following, Josh and I talked a lot.

Over the next few weeks, friends told me that Josh was interested in me as more than a friend — and I was quick to inform them it would never happen! Josh was lots of fun (and I couldn’t get over the way his eyes sparkled!) but he was almost five years younger than I was; there was just no way. 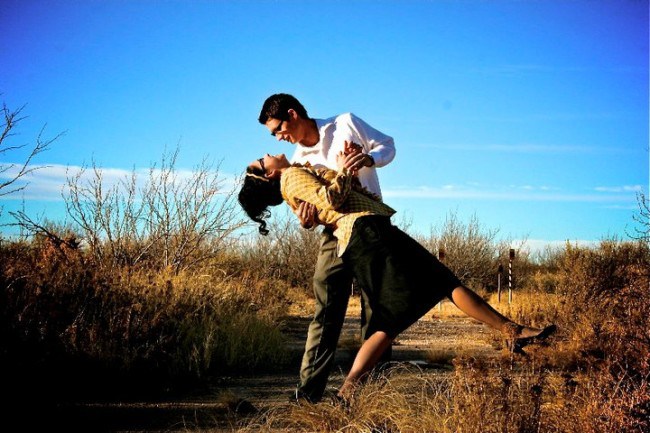 Then came August 4, 2007, the day I found myself marrying him — and the first day of the happiest seven-and-a-half years of my life. And you know what? Other than to stop and envy his youth whenever birthdays roll around, I never think about our age difference.

Yes, Josh and I are (very) different, and in more ways than age. Yes, marriage has its unglamorous days. But at the end of the day, I can truly say that Josh is my best friend. He has been by my side through the best years of my life; he is a gift from God.

So what’s my point?

To encourage you, single friend, to relinquish your “perfect-husband” list to God. Don’t compromise on the important stuff! But don’t write off a guy because he’s not what you always imagined, either. Give your list to God.

Maybe you’re already married — or you’re not, and you never care to be — but you still have a this-must-go-exactly-as-planned list, a list that would be better off managed by God. I’ve been there before, clutching tightly to ideas and dreams that had to be just so, only to find later that God had something better in mind.

Stop clinging to your list like a security blanket; stop stressing over it. Surrender it to God.

Here’s to hoping that of all the love you celebrate today, you rejoice in the love of Jesus most of all!